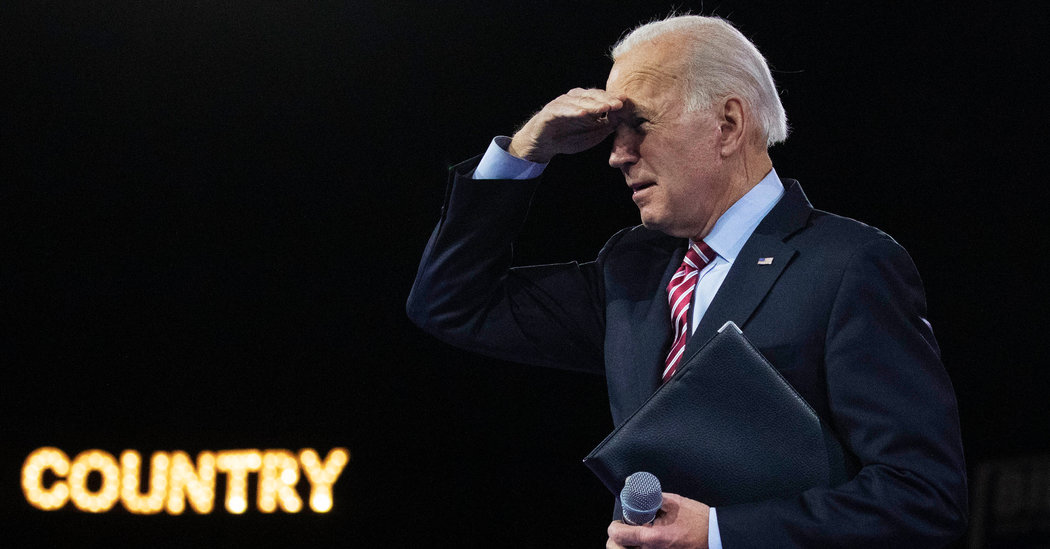 Now, some climate-focused voters said they are struggling with their feelings as former Vice President Joseph R. Biden Jr. appears certain to become the Democratic nominee. In interviews with two dozen activists and voters who consider the planet’s warming their top issue, almost all said they worried that Mr. Biden has not made the issue a sufficient priority or been specific enough about his plans.

“The response to Biden on climate change ranges from suspicion to resignation,” said Megan Mullin, an associate professor of environmental politics at Duke University’s Nicholas School of the Environment.

Multiple polls have found climate change has been among the top three issues for Democrats in the 2020 primary, often second only to health care. And many Democratic voters are happy with the front-runner. One Super Tuesday exit poll found that 34 percent of voters who cited climate change as their most important issue went for Mr. Biden, compared to 28 percent who voted for Mr. Sanders.

Mr. Biden said this week he was prepared to act aggressively. After winning three more states that held primaries on Tuesday, he extended an appeal, “especially to the young voters who have been inspired by Senator Sanders: I hear you. I know what is at stake. And I know what we have to do.”

But Mr. Biden has resisted tacking left on climate change these past few weeks in the way he did recently when he endorsed Senator Warren’s bankruptcy plan.

His climate change plan would inject $1.7 trillion into the economy with an aim of achieving zero emissions in the United States by 2050. Mr. Sanders, in comparison, calls for spending $16 trillion and completely eliminating fossil fuels from the American economy by 2050. Asked about it Sunday in a debate, Mr. Biden was unapologetic.

“It is ambitious enough to tackle the crisis,” Mr. Biden said. Noting his home state of Delaware is three feet above sea level and vulnerable to warming, he told Mr. Sanders, “I don’t need a lecture on what’s going to happen about rising seas.”

He pointed to his introduction, as a senator, of one of the first bills on climate change and his efforts in the Obama administration on the Paris Agreement. He also noted that, as part of the 2009 Recovery Act, he helped direct $90 billion toward clean energy investments that helped bring down the costs of solar and wind energy.

“That’s why not another new coal plant will be built,” Mr. Biden said to Mr. Sanders. “I did that while you were watching.”

Surrogates for Mr. Biden said the overwhelming support Mr. Biden has seen in recent primaries indicated that most Democrats like his climate policy already.

“It’s hard to argue with someone who is winning by such wide margins that he doesn’t have a plan that people like,” said Representative Donald McEachin, a Virginia Democrat who helped design Mr. Biden’s plan. “They know what his climate plan is, and they’re fine with it.”

Some critics are unconvinced. Laurie Mazer, a renewable energy consultant in Philadelphia, said she still could not get behind Mr. Biden’s candidacy. Ms. Mazer, 41, said Mr. Biden should set tougher targets and call for a national ban on hydraulic fracturing, the oil and gas extraction technique also known as fracking.

“We’ve got to get to a place where climate change is treated as seriously as it needs to be,” Ms. Mazer said. “I’m sure Biden and I aren’t that unaligned, but sending a message is important for me.”

Liam Shaffer, a 27-year-old wine salesman in New Jersey and supporter of Mr. Sanders, said working with a product directly affected by climate change had made the issue one of his top voting priorities. He acknowledged that he had not read Mr. Biden’s climate plan, but he said his impression was that Mr. Biden did not favor the sweeping changes that he believes are necessary.

“He represents a return to the way things were run under Obama,” Mr. Shaffer said. “I guess I just don’t feel that’s enough.”

And Alyssa Midcalf, a 25-year-old musician who owns a vintage clothing store in Detroit, said she disliked Mr. Biden’s willingness to accept corporate donations and the lack of respect she feels he has shown young activists fighting for aggressive plans like the Green New Deal.

“He has time and time again treated constituents like they don’t matter to him,” she said.

“There’s more that his plan can do,” Mr. Ricketts said of Mr. Biden. He pointed to specific renewable energy standards; a strategy for halting carbon emissions for individual sectors like transportation, buildings and electricity; opposing fossil fuel subsidies; and providing details for the promises his plan makes of fighting for low income communities of color most vulnerable to environmental injustices.

Maggie Thomas, who was Mr. Inslee’s deputy climate change director before joining Senator Warren’s campaign, has not yet thrown her support behind either Mr. Sanders or Mr. Biden. But she said if Mr. Biden does become the Democratic nominee, “He really needs to show that this is a priority for his campaign.”

President Trump’s re-election campaign already is painting Mr. Biden as radical on climate change, releasing a video after Sunday’s debate edited to emphasize his statements against fossil fuels and mocking moderate Democrats who had sought to assure voters in gas-rich states that the former vice president does not intend to ban fracking.

Mr. McEachin said he thought Mr. Biden was open to other ideas, but he said the notion that Mr. Biden is not aggressive enough was a misperception. “From a climate change point of view you can’t have a better candidate than Joe Biden,” he said.

Collin O’Mara, the president of the National Wildlife Federation, which last week endorsed Mr. Biden through its political action fund, called Mr. Biden’s plan and approach to climate change “incredibly impressive.” He credited the activist movement for raising the standard for candidates to meet.

“In any other election, this would be the strongest plan that’s ever been put out,” Mr. O’Mara said. But ultimately, he added, “The best laid plans are just symbols on a page.” He said he supports Mr. Biden because the former vice president could actually get his ideas enacted.

Jennie Sweet-Cushman, an associate professor of political science at Chatham University in Pittsburgh, has been making a similar argument to her students. She cited climate change as one of her top three voting issues and said she supported Mr. Biden because he is a pragmatist, and her years studying government have shown her that major structural changes require bipartisanship.

“If you want any sort of change, you have to have people pushing it that are willing to listen to the other side, and I don’t see that out of the Sanders campaign,” she said.

But Ms. Cushman has had a hard time convincing students like Taylor Pelow, 20, a chemistry and political science major from Buffalo who said her dream was to one day run the Environmental Protection Agency. Ms. Pelow said she believes in banning fracking and wants to see a transition away from fossil fuels earlier than Mr. Biden does.

If Mr. Biden wins the Democratic nomination Ms. Pelow said she would vote for him in November, but only because she believes he is slightly better than President Trump on climate change.