Canadian Dollar Sinks as US Dollar Climbs Ahead of Fed Conclave. Where to for USD/CAD?

The Canadian Dollar continues to remain under pressure ahead of today’s Fed meeting. USD/CAD is holding the gains seen in response to a miss on Canadian CPI yesterday.

The next Bank of Canada monetary policy decision is not due until 26th October and there will be another set of CPI data on the 19th of October.

Currency markets have been subdued so far, with the exception of a weaker Australian Dollar. Iron ore and other base metals declined today, dragging the commodity-exporting currency down.

In the rare earth space, lithium prices have gone ballistic after a record price received by Pilbara Mineral Limited this week in an auction for a shipment from Pilbara, the mineral-rich region of north-western Australia.

The price of $7,708 a ton for spodumene concentrate delivered to China is the highest on record. Spodumene is a partly processed form of lithium.

The Bank of Japan did an unscheduled intervention of bond buying today, maintaining the cap on 10-year Japanese Government Bond (JGB) at 0.25%. USD/JPY is edging up toward 144.

The inversion of 40 basis points is nearing the 20-year record of -0.51% seen in August. The US Dollar (DXY) index is pressing toward the 20-year high seen earlier this month.

APAC equity markets appear a tad rudderless, having been pulled lower after a negative day on Wall Street.

Gold is languishing at 2-year lows near US$ 1,660 while crude oil is steady with the WTI futures contract around US$ 84 bbl, while the Brent contract is a touch above US$ 90.70 bbl.

The US will see some data on home sales and mortgage applications, but the Federal Open Market Committee (FOMC) meeting will hold centre stage.

The market is mostly anticipating a 75 basis point lift, but the language from Fed Chair Jerome Powell after the decision is announced will be the key for markets going forward.

The full economic calendar can be viewed here.

How to Trade Oil

The 2-year high in USD/CAD saw the price outside the upper band of the 21-day simple moving average (SMA) based Bollinger Band. A close back inside the band may signal a potential pause or reversal in the bullish run. 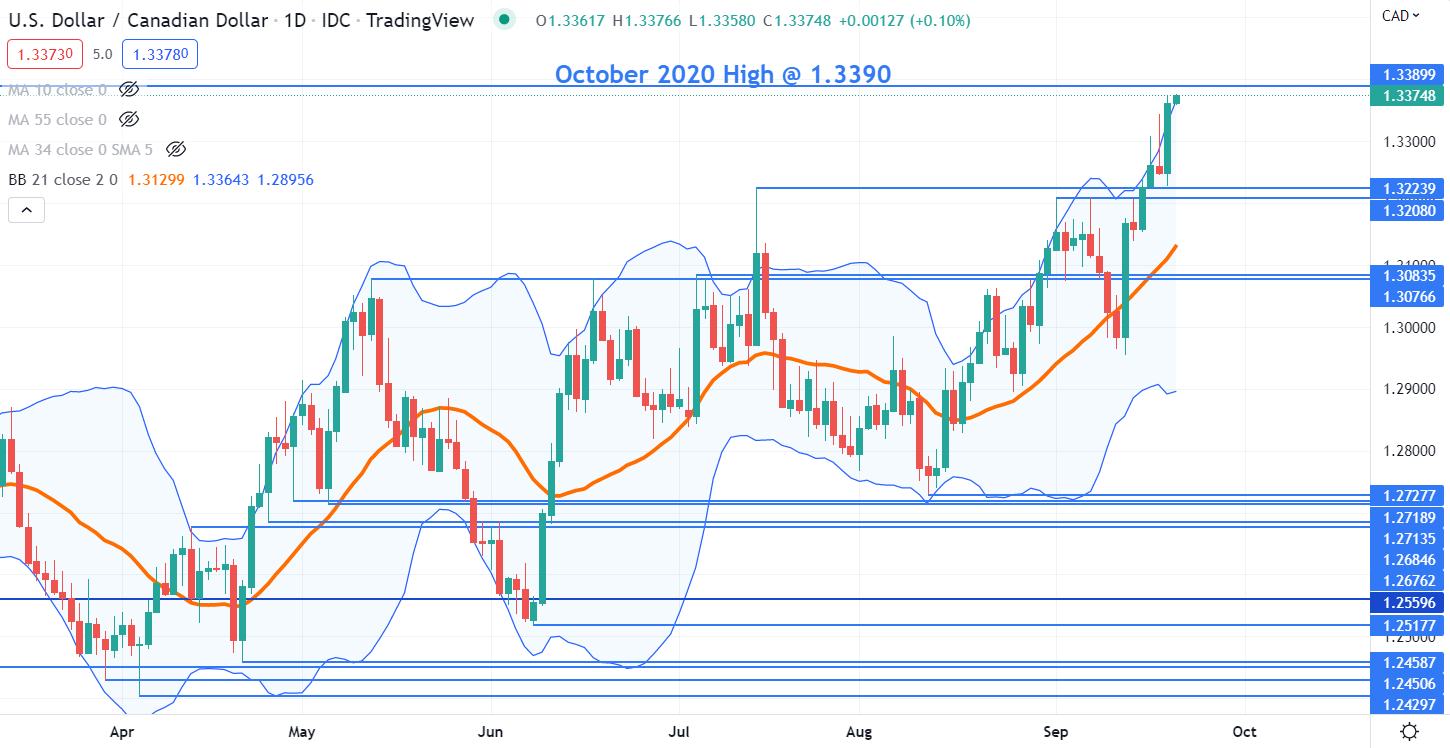