Bitcoin (BTC/USD) jumped over 7% this morning after Elon Musk denied that Tesla had sold its Bitcoin holdings, a tweet many crypto traders were vigorously waiting for. The tweet came out early this morning before Europe started trading and it followed a weekend of heavy selling.

The largest crypto has been facing increased bearish pressure since last weekend but sellers piled into the market on Thursday when a tweet from Elon Musk caused the coin to plunge over 13% on that day. It all started with Musk questioning the environmental impact of Bitcoin mining, causing cryptocurrencies to slump at the end of the trading week. But further selling pressure was found over the weekend as the Tesla magnate failed to deny that Tesla had sold their Bitcoin holdings.

On Sunday, a tweet from a crypto-focused handle suggested that Tesla had dumped its Bitcoin holdings, to which Musk replied with “indeed”. This was enough to send crypto enthusiasts spiraling, with most digital coins trading heavily into the red. On Sunday night, Ether, Litecoin, and EOS were all down over 20% from their opening level on Thursday. 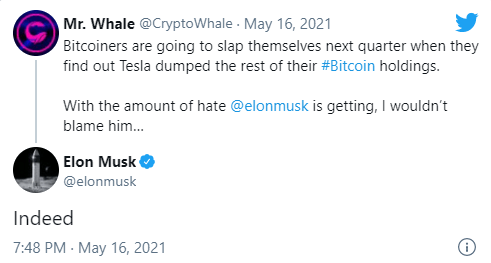 But this morning’s denial tweet seems to have been enough to stop further sellers into the crypto space, at least for now. Looking at the daily chart, BTC/USD retraced back towards the highs seen in January this year, at which point Bitcoin was at a record high after months of small gains after the pandemic-induced drop. Since then it has been a wild ride, with strong rises and pullbacks, which have so far culminated in a lot of volatility and little actual progress in price.

I expect cryptocurrencies to remain highly sensitive to Elon’s tweets going forward, but it is also important to note that it is tax week in the US and many might have liquidated their positions in order to be able to pay their tax bill, so we may see a rebound from here in the next week or so as traders come back into the market. If so, look out for a break above 50,000 in BTC/USD as a sign of bullish momentum, although the true test will be at the 60,000 mark, which has been impenetrable since the 18th of April, and even when buyers managed to break above it, it only lasted a few days.

How to Read a Candlestick Chart