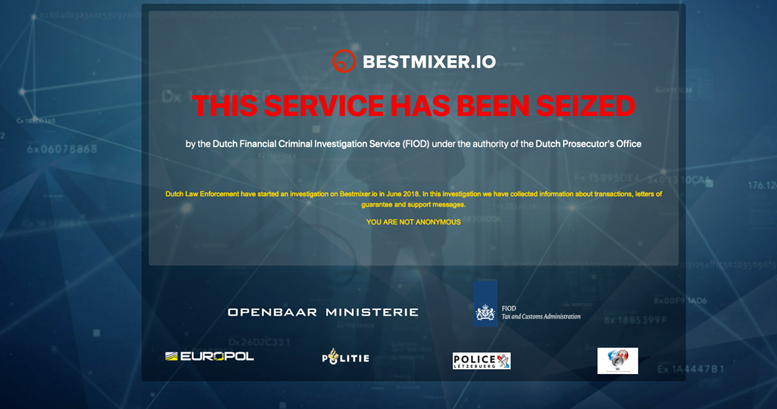 Europol indicated that on Wednesday the Dutch Fiscal Information and Investigation Service had seized Bestmixer.io which is a bitcoin transaction mixer. A statement from Europol referred to the action as the “first law enforcement action of its kind against such a cryptocurrency mixer service.”

The operation that was carried out jointly by Europol, FIOD and Authorities in Luxembourg was started in June last year after Bestmixer services were flagged by Internet security firm McAfee. Following the crackdown, six servers were seized in Luxembourg and the Netherlands.

Bitcoin transaction mixer websites such as Bestmixer.io operate by pooling together funds and then creating a new web of transactions with the aim of obfuscating their source. In essence, what the coin mixer users do is to send funds plus an extra fee and then they will receive all their money from a different source. This makes it difficult to trace the original source of the funds. Bestmixer is a leading cryptocurrency mixer that offers cryptocurrency mixing services for Litecoin, Bitcoin Cash and Bitcoin Core.

Bestmixer has transacted 27,000 bitcoins since its launch

According to Europol, the funds going through Bestmixer.io are said to have had a criminal origin or a criminal destination and the mixer was being used to launder and conceal criminal transaction of funds. Since its launch in May 2018 Bestmixer.io had mixed an estimated 27,000 bitcoins achieving a turnover of approximately $200 million.

Bestmixer.io blatantly advertises their money laundering services on the site where they have described the anti-money laundering policies but go ahead to explain how mixing could help avoid the regulations by making money untraceable and anonymous. Offering this service is illegal in most countries.

CipherTrace CEO, Dave Jevans stated that the crackdown indicates that increase in regulation on crypto-to-crypto services.  This comes at the back of European AMLD5 regulations and US FinCEN views that indicate that cryptocurrency services are money business services and as such should be subject to regulations.