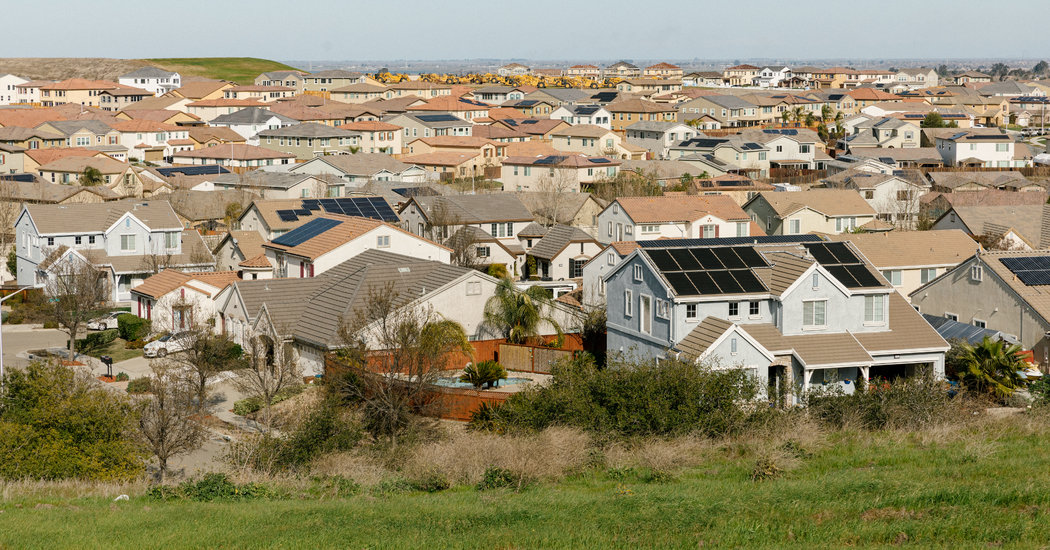 In just days, tens of millions of people across the United States will have to make fresh payments on their mortgages. Their lenders have come up with a plan to help borrowers who can’t pay because of the economic fallout from the coronavirus — and they want the federal government to backstop it.

Such help would cost tens of billions of dollars, and groups representing the mortgage industry warned that their efforts to help homeowners could cause the entire industry to collapse without the government’s help.

“The more consumers we help through forbearance, and the longer this goes on, the greater the strain on the servicers needed to foot the bill,” the groups, including the Housing Policy Council, the American Bankers Association and the Mortgage Bankers Association, said in a letter to Treasury Secretary Steven T. Mnuchin and other federal officials on Monday.

Last week, federal housing regulators took steps to prevent foreclosures on millions of homeowners with mortgages backed by either the Federal Housing Administration or the giant mortgage finance firms — Fannie Mae and Freddie Mac. Those mortgages make up a large percentage of the country’s home loans, but the industry plan offered Monday would cover all borrowers, including almost $3 trillion in home loans over which the government has less control.

The finance industry groups, which together represent the banks, finance companies, servicers and mortgage investors that make up the totality of the United States mortgage industry, want to give borrowers a three-month break from making mortgage payments — and possibly extend the break to 12 months — if the coronavirus crisis has reduced their income, sickened them or kept them from working.

The industry’s plan would let borrowers call or go online to temporarily freeze their payments and modify their loans with less paperwork than normal. It would not offer any forgiveness on the loans, which means the borrowers would eventually have to make up the lost payments, although they would have some flexibility in how they did so.

In return, the industry says, it needs comprehensive support from the government as soon as possible. That help could potentially include access to loans and liquidity programs provided by the Federal Reserve, which would require Congress to loosen rules governing the Fed’s emergency powers.

The industry groups said the most vulnerable companies were dozens of nonbank lenders, which sprouted up in the aftermath of the 2008 financial crisis and make home loans that are often pooled by Ginnie Mae, a government-sponsored company that, unlike Fannie Mae and Freddie Mac, does not help backstop mortgage servicers. The servicers are still required to make regular payments to mortgage investors if borrowers miss payments.

David H. Stevens, a housing official under President Barack Obama and a former chief executive of the Mortgage Bankers Association, said the industry needed the federal government to immediately mobilize a response bigger than what the Fed did to prop up the mortgage market during the 2008 crisis.

“We’ve got millions of Americans who are not going to be able to make their mortgage payments next week,” he said. “The impact of what’s happening here makes 2008 look like it’s a walk in the park.”

The rise of nonbank lenders, which often operate with thinner capital margins than traditional mortgage lenders, has been a source of concern for regulators for several years.

The industry groups sent the letter as Congress and the Trump administration were grappling over plans to inject nearly $2 trillion into the economy to fight the effects of the economic shutdown caused by the coronavirus pandemic. It was not clear when lawmakers will reach a deal or what it will contain. Various sectors of corporate America — airlines, cruise ships, hotels, restaurants and small businesses — are all lobbying for help staying afloat while the economy goes into stasis because of the outbreak.

The groups estimated that if a quarter of all mortgage borrowers received three months’ worth of temporary payment relief, it would take $36 billion to shore up the mortgage markets. If payments had to be frozen for nine months, it would cost $100 billion.

“There is broad, sweeping agreement that this is urgent and it needs to happen now, not a week from now,” Mr. Stevens said.

Last week, the Federal Housing Finance Agency issued orders that cover about 29 million homeowners with mortgages backed by Fannie Mae and Freddie Mac, imposing a foreclosure moratorium and allowing homeowners in financial trouble to get a reprieve on their mortgage payments for up to a year.

On Monday, the F.H.F.A. took additional steps to help renters living in large apartment complexes and provided a boost to mutual funds and hedge funds that invest in securities cobbled together from mortgages.

The F.H.F.A. ordered Fannie and Freddie to offer multifamily property owners a break on mortgage payments if the landlords hold off on evicting renters who have lost a job or income because of government shutdowns.

Mark Calabria, the director of the agency, said Fannie and Freddie were “working with mortgage servicers to ensure that these programs are implemented immediately so that property owners and renters experiencing hardship because of the coronavirus can get the assistance they need.”

The F.H.F.A. also is permitting Fannie and Freddie to make short-term loans to investors in mortgage-backed securities, the investment vehicles made up of bundled mortgages, according to two people familiar with the agency’s plan who were not authorized to speak publicly. The financing is intended to be a two-day bridge loan that will permit mortgage investors to meet payments to banks and other lenders.

On Monday, the Fed said it would begin buying government-backed bonds, including Fannie- and Freddie-backed housing debt, as part of a sweeping plan to calm markets.

Mr. Stevens said that was not enough. In 2008, the Fed engaged in quantitative easing by buying private-issuer mortgage securities in great quantities. The program lasted years and made it possible for banks to make new loans and sell them, and for investors to remain confident in their ability to easily trade the packages of loans they bought.

In their letter, the mortgage groups said the gravest problems in the market lay outside the loans backed by Fannie and Freddie, in the independent market.

“The financial stress to the system is highly concentrated,” they wrote.