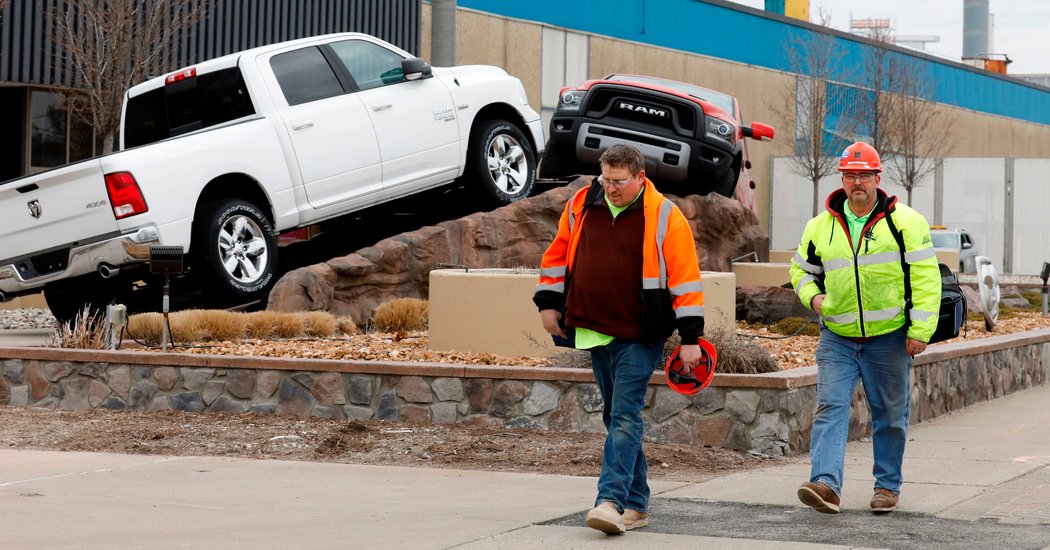 With fear of infection rising among factory workers, and few customers shopping for cars, several automakers on Wednesday decided to idle their plants in the United States, Canada and Mexico for at least a week. The decisions will put tens of thousands of people out of work and add to the coronavirus outbreak’s growing economic toll.

The country’s largest automakers — General Motors, Ford Motor and Fiat Chrysler — decided to close plants after the United Auto Workers union pressured them to do so to protect workers. That pressure intensified after it was revealed on Wednesday that a worker at a Ford truck plant in Dearborn, Mich., had tested positive for the virus.

In addition to G.M., Ford and Fiat Chrysler, Honda, Toyota and Nissan also said they would idle their North American factories. The shutdown of car plants will force hundreds of companies that produce parts and components to follow suit over the coming days.

“This is another big blow to the economy,” said Patrick Anderson, president of Anderson Economic Group in East Lansing, Mich.

Although some autoworkers will be eligible for sick pay, many will get only a portion of their income and others will have to rely on unemployment insurance.

“This is going to mean a significant loss in income,” Mr. Anderson said. “Workers are really going to be hurt if there’s not some kind of sustained program to help them.”

Ford, which has 55,000 U.A.W. employees, said those with at least one year of service would receive 75 percent of their regular pay through a combination of unemployment benefits and supplements paid by the company. G.M. is discussing a similar plan with the U.A.W., a company spokesman said.

Ford said in a statement that it would shut down factories after the end of Thursday evening shifts. G.M. said it would stagger plant closings to “ensure that production stops in a safe and orderly fashion.” Fiat Chrysler said it would begin shutting down production on Wednesday. All three companies said they would idle their plants until at least March 30. G.M. employs 47,000 U.A.W. members and Fiat Chrysler 49,000.

Earlier on Wednesday, Honda said it would close its plants for six days beginning March 23, with plans to restart production on March 31. It said it would provide full pay for the 27,000 employees in North America affected by the decision. Nissan told its dealers it will shut down its North America plants Friday and keep them idle until at least early April.

More than one million people are employed in automobile and auto parts manufacturing in the United States, and 1.3 million work for auto dealerships, according to the Bureau of Labor Statistics.

“We have been taking extraordinary precautions around the world to keep our plant environments safe and recent developments in North America make it clear this is the right thing to do now,” G.M.’s chief executive, Mary T. Barra, said in a statement.

The company also said sales had been slowing, a trend it expects to continue as more people confine themselves to their homes to avoid contracting or spreading the virus.

Some auto dealers said their showroom traffic fell sharply starting on Tuesday. “We had four customers cancel deliveries because of the virus,” said Wes Lutz, owner of Extreme Dodge in Jackson, Mich., about 80 miles west of Detroit. “They are afraid they will lose their jobs.”

Mr. Lutz and other dealers said customers were still bringing cars in for maintenance and repairs, but the dealers are worried that service visits could drop off soon as social distancing sharply reduces the number of miles people normally drive.

“If you don’t leave the house, your car isn’t going to need an oil change for a while,” said Adam Silverleib, owner of Silko Honda in Raynham, Mass.

Automakers went into the week hoping to keep their plants running and employees safe by altering shift schedules to leave more time for sanitizing plants and reducing contact between workers. On Monday, G.M.’s Chevrolet division began offering zero-percent loans to lure consumers into dealerships. Hyundai offered to let customers return recently purchased cars if had they lost their jobs.

At the same time the U.A.W. was pressing the three companies based in and around Detroit to halt production for two weeks. On Tuesday G.M., Ford and Fiat Chrysler agreed to take steps short of shutting down production.

Then on Wednesday morning Honda announced its plans to stop production, and the news about the Ford worker in Dearborn was made public. In response, Ford halted work at the final assembly section of the plant while continuing production in the stamping and body shop areas.

Just hours later, all three of the large U.S. automakers reversed course and said they would idle their factories.

In Europe, auto manufacturing has been at a virtual standstill after Daimler, Ford Motor and Nissan joined Volkswagen and most other major carmakers in shutting down.

In California, Tesla, the luxury electric carmaker, has cut staffing at its Fremont factory from 10,000 to about 2,500 after local officials issued a shelter-in-place order, according to Ray Kelly, a spokesman for Alameda County.

Under the order, nonessential businesses like Tesla are permitted to continue “minimum basic operations” as long as employees do their best to stay at least six feet away from one another, according to the county.

“Spirit of the law goes a long way,” Mr. Kelly said. “We’re doing things that we would never do before.” Tesla may very well reduce its work force further, he said, based on a conversation Wednesday with a senior Tesla executive. The automaker did not respond to a request for comment and its chief executive, Elon Musk, has criticized the public reaction to the outbreak on Twitter.