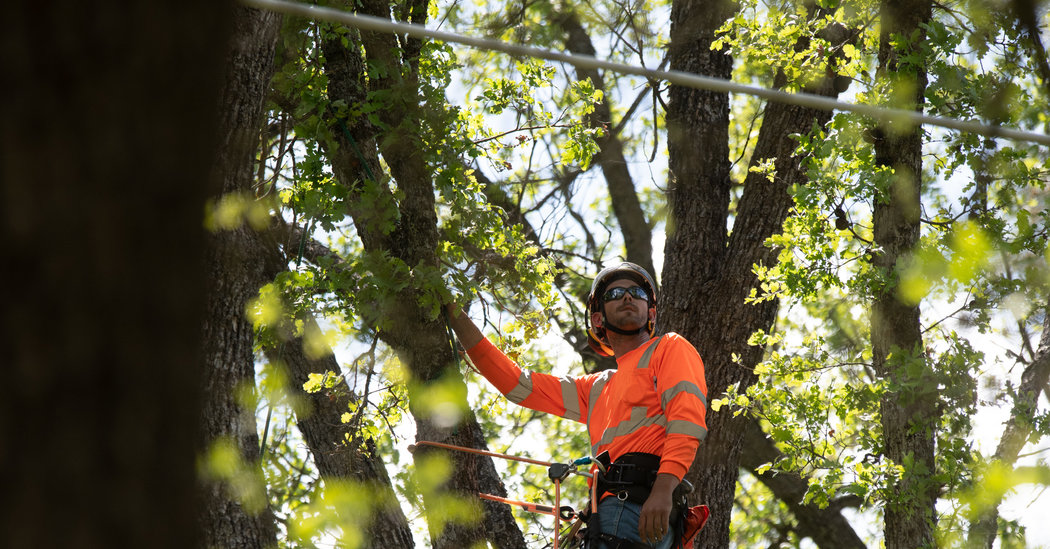 OAKHURST, Calif. — Pacific Gas & Electric has a big problem. Its equipment keeps coming into contact with dry trees and shrubs and starting devastating wildfires. So the company is scrambling to trim or cut down hundreds of thousands of trees across its vast Northern California territory.

But it has another problem: finding people to do that work.

Beyond the tight labor market, there is the challenge of enlisting a certain kind of worker for the difficult and dangerous job. To trim trees well, especially the 200-footers in the Sierra Nevada forests, contractors must be strong and agile, and able to handle fear and adrenaline surges.

When all goes well, “it’s like Cirque du Soleil up in the trees,” said Jose Mercado, founder of the Hispanic Arborist Association, who climbed trees professionally for more than two decades near Los Angeles. “You’re in the best physical condition of your life.”

When things go wrong, the consequences can be deadly. Since 2017, the Labor Department has tracked 127 deaths related to tree work nationally, including 20 in California. Among the top causes of injury or death are strikes by branches, electrocution and falls.

PG&E and other utilities farm out tree work to a network of contractors. Those businesses, in turn, cast a wide net to find qualified workers, with entry-level wages starting at $15 an hour.

Tyler Dudley, 32, has trimmed trees around power lines near Yosemite National Park for five years. He grew up using chain saws to cut firewood in a nearby mountain town, so strapping spikes to his boots and learning how to climb seemed natural enough when hundreds of jobs opened up to wrangle trees killed during drought in recent years.

“If you can do your job, then boom, you’re on and working,” Mr. Dudley said.

Because of the recent fires, it’s relatively easy for experienced hands like him to find union jobs that pay up to $28 an hour, but the work is getting harder.

“They want 12 feet, basically a ball around the power line,” Mr. Dudley said, referring to the required distance between trees and utility equipment. “Now I have to go to the very top of that tree and take the branches off.”

[Researchers are finding new ways to detect wildfires sooner and keep them from spreading.]

Mr. Dudley’s employer, ArborWorks, has grown to 550 workers, from 100 in late 2016, in part by recruiting from other contractors. Davey Tree, which supplies about 1,000 workers to PG&E and other utilities, is flying people from out of state. Utilities are also tapping other kinds of contractors that have worked in disaster relief after hurricanes and tornadoes.

PG&E, California’s largest electric utility, recently told state regulators that it would take until 2026 to catch up on inspecting up to 100 million trees and cutting or trimming as needed. The company, which filed for bankruptcy protection in January after incurring an estimated $30 billion in fire liabilities, plans to spend more than $700 million on the effort this year. It says it has about 3,000 tree workers, though it could use more.

Last month, it said it had already fallen behind on its 2019 target of trimming and removing 375,000 trees classified as having a “higher potential to fail” because of limited manpower, bad weather and complications with permits.

PG&E told state regulators that dangerous work around live power lines “cannot just be performed by anyone with a chain saw.” There are no centralized apprenticeships for utility tree trimmers, however, as there are for electrical line work. Instead, contractors certify that workers know how to cut branches away from lines, do aerial rescues and safely navigate live wires, which in California requires 18 months of training.

“PG&E has been trying to find resources,” Kevin Orsini, a lawyer for PG&E, said at a January court hearing on the company’s safety record. “I don’t mean money. I mean people.”

With fire season looming, state regulators are evaluating the fire plans submitted by PG&E and other utilities. They are weighing how much emphasis the companies should place on trimming trees compared with other changes, like better insulating live wires or pre-emptively shutting off power when fire risk is elevated.

In April, the California Public Utilities Commission requested more information on whether costs of PG&E’s plan could outweigh benefits — for example, whether the plan would result in cutting down too many healthy trees — and how the commission should measure success in reducing fire risk.

The economics of tree trimming are central to those questions. Paying per tree is the industry norm, contractors say, though for urgent jobs — like the cleanup in Paradise, the town leveled in November by the Camp Fire, which was caused by a PG&E transmission line — the rates for time and material are sometimes higher.

Contractors that utilities pay for each tree they trim or cut are “typically going to be incentivized to do work that’s fast to do,” said Elizaveta Malashenko, the commission’s deputy executive director of safety and enforcement policy.

“Utilities are definitely on notice that they need to rethink vegetation management and do it differently,” she added.

In the meantime, the hiring for PG&E’s efforts has left other businesses struggling to find workers.

“Trying to get resources staffed up quickly can be difficult, because most of the resources are going toward PG&E,” said Don Akau, vegetation program manager at another California utility, San Diego Gas & Electric.

Mr. Akau said his utility’s roughly 200-person contract tree work force had remained steady in recent years, but he plans to hire six to 12 tree crews as employees this year.

Family-run tree businesses that serve residents wanting to fireproof homes say they cannot compete with some PG&E contractors that are offering signing bonuses and willing to pay workers in cash.

“We’ve had a solid crew for a long time,” said Tim Murphy, who runs Tim the Tree Man in Nevada City, Calif., near Tahoe National Forest. “PG&E’s taken them.”

At 62, Mr. Murphy has resorted to climbing trees himself since two of his three climbers left last fall. “I’m one climber away from being out of business,” he said.

Some companies are turning to automation.

In the Sierra foothill town of Oakhurst one recent afternoon, a dying tree was taken down near a PG&E power line by what looked like an industrial version of the mechanical claw in games in which players fish stuffed animals out of glass tanks.

The machine, a telescoping grapple saw, grabs onto trees with 3,200 pounds of pressure, slices them and then drops the lumber to the ground.

“It’s like a big Tonka toy,” said Cainan Watchorn, an ArborWorks climber with tattoos around both biceps.

Mr. Watchorn’s bosses have assured him that the machine will merely augment his work. He’s skeptical but agrees that it could reduce the need for humans to scale the most dangerous trees.

“I’m 25, and I feel like I’m 35,” said Mr. Watchorn, who trims trees for homeowners on weekends for extra income. “The toll is a physical stress, but it’s more mental stress.”

But automation is just starting to gain a foothold. And the robots aren’t always popular — especially with veteran tree climbers. Mr. Watchorn’s boss, Paul Nichelmann, a third-generation logger who spent years living near remote job sites, said humans would still have to do the work in areas reachable only on foot.

Mr. Nichelmann, 53, said crews like his were working as quickly as they could. All it takes is a glimpse of the grass on nearby hills, which is starting to turn from winter-green to brittle gold, and everything starts to look like kindling.

“If we don’t go do the work, Mother Nature’s going to do it,” he said. “And she’s pretty indiscriminate.”