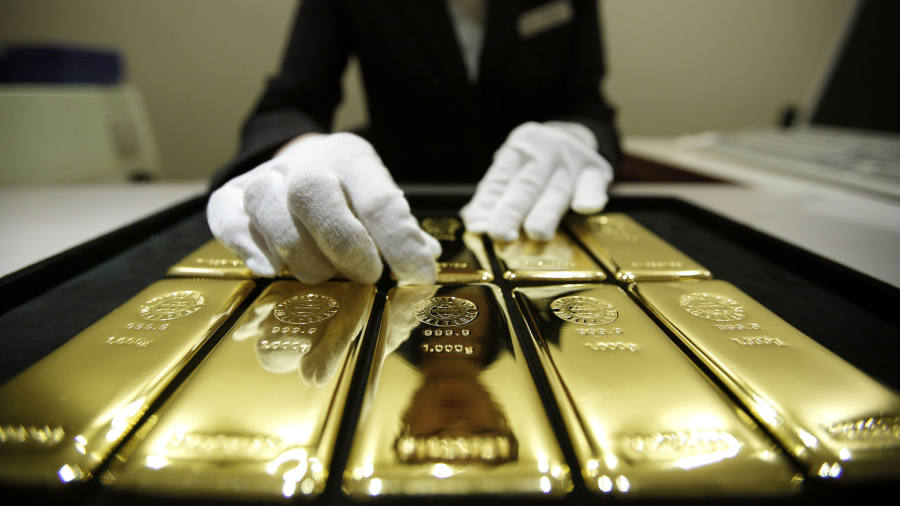 Plunging stock markets and the outbreak of the coronavirus have helped push holdings in gold-backed exchange traded funds to record highs in 2020.

The buying is a clear indication of the prominent role of gold ETFs in investors’ portfolios, especially during periods of uncertainty and panic.

Gold-backed ETFs saw $4.9bn of inflows in February, taking holdings to a record 3,000 tonnes of gold, according to the World Gold Council, worth $157bn at current gold prices.

The buying spree helped propel gold prices to a seven-year high of $1,702.56 a troy ounce on March 9, as global stock markets tumbled. Gold has also benefited from low interest rates, which reduce the so-called opportunity cost of holding gold compared with a yielding asset such as a bond.

“There’s a lot of investors looking for somewhere to hide and gold is in the sweet spot there,” Chris Mellor, head of Emea ETF commodity product management at asset manager Invesco, says.

“In the worst-case scenario there will be a contraction in global economic capacity and in that environment gold is a very good place to be.”

Since the first gold-backed ETF, WisdomTree’s Gold Bullion Securities, was launched in March 2004, the number of gold-backed ETFs has proliferated across the world. There are now 87 such funds in 16 countries tracked by the WGC.

The largest holdings are evenly split between Europe and the US, with $72bn worth of gold in European products and $78bn worth of gold in US products as of February, according to the WGC. In Europe, gold-backed ETFs are known as exchange-traded commodities (ETC), due to rules that prevent Ucits funds from owning only one commodity. They are structured as debt instruments that own the underlying metal.

The growing competition has spurred a reduction in costs for investors. In February Invesco cut the fee on its gold-backed exchange-traded certificate to 0.19 per cent from 0.24 per cent of an investor’s holding. Unlike equity ETFs, gold ETFs that are backed by physical gold need to pay for the cost of storage of the metal in a vault.

“I’d say there’s always potential for costs to come down further,” Mr Mellor says. “But it depends on the broader market and competitive landscape. At 19 basis points we think it’s a well-priced product.”

George Milling-Stanley, chief gold strategist at SPDR, calls it “the 800-pound gorilla in the gold ETF space” and says large institutional investors prize it for its liquidity. The bid-ask spread on the ETF has consistently remained within 1 basis point, despite gold’s boom to bust ride over the past decade, he says.

“There’s a reason why something is more expensive than other things and it’s called quality,” Mr Milling-Stanley says. “It has one-tenth the size of the trading spreads of all the competing products. Guaranteeing a narrow trading spread is very attractive compared to the other ETFs out there.”

Still, in an effort to target the retail end of the market, the World Gold Council and State Street Global Advisors in June 2018 launched a lower-cost version of the ETF, the SPDR Gold MiniShares, which now has $1.38bn in assets. Other lower-cost ETFs include the Aberdeen Physical Swiss Gold Shares, GraniteShares Gold Trust, and Perth Mint Physical Gold ETF. The GraniteShares Gold Trust, which was launched in 2017, has an annual charge of 0.18 per cent.

“We’re in a hyper-competitive market,” Will Rhind, the chief executive and founder of GraniteShares, says. “But we’re kind of at a level where it’s difficult to see much material movement from here — the market has coalesced around [the] 17.5 to 18 basis points level. Providers realise there is a physical cost and ultimately people have to try and make money.”

Asia only held $4.5bn worth of gold in ETFs in February, according to the WGC.

China could be a future growth area for global financial institutions as the country opens up its capital markets. The largest ETF in China is the Huaan Yifu Gold, which was launched in 2013 and has Rmb7bn in assets ($986m).

“People are always surprised that gold ETFs in China or India are very small,” Mr Rhind says. “[China] has a long way to go, but it has to be the biggest potential in the world if you’re looking out the next 20 years.”