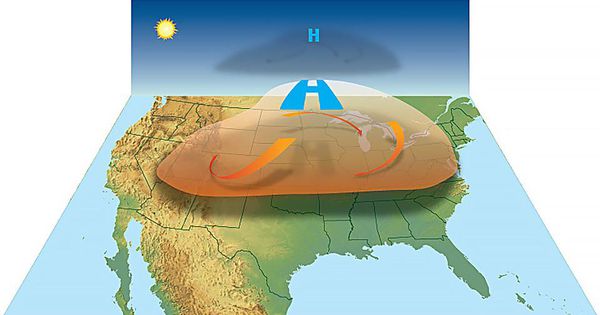 As I browsed social media Friday, my Alpha Phi Alpha fraternity brother Rontai Walker tagged me in this post, “Dear Dr. Marshall Shepherd, Why does Georgia currently feel like Las Vegas?” Walker, the associate director of Student Involvement and the Student Center at Georgia Gwinnett College, is not imagining things. Parts of the southeastern U.S. will be sweltering through the Memorial Day weekend and beyond. Here are three things that you need to know about the first heatwave of the season.

A dome of high pressure with sinking air is often associated with heat waves.

It is going to be hot and sustained. The National Weather Service Eastern Region tweet sums up the heat expected over the next several day in the Southeast:

The Memorial Day weekend will feature the first extended heat wave of the season across the Southeast into the southern mid Atlantic region. High temperatures could approach record levels. Please take precautions to avoid heatstroke if you have outdoor plans the next few days.

The map below shows expected temperatures for Memorial Day in the Southeast. Temperatures range from the upper 90s to 100+ for much of the region. Before I discuss what is going on, it is instructive to define a “heat wave.” According to the American Meteorological Society Glossary of Meteorology, a heat wave is defined as:

A period of abnormally and uncomfortably hot and usually humid weather. To be a heat wave such a period should last at least one day, but conventionally it lasts from several days to several weeks. In 1900, A. T. Burrows more rigidly defined a “hot wave” as a spell of three or more days on each of which the maximum shade temperature reaches or exceeds 90°F. More realistically, the comfort criteria for any one region are dependent upon the normal conditions of that region.

On Saturday morning, the NWS Eastern region tweeted that several records heat records had already been broken on Friday, and it is only the beginning of the heat wave.

Memorial Day temperatures in the Southeast.

So what’s causing the extreme heat wave in the Southeast? The simple answer is that a strong upper level ridge of high pressure will remain in place for several days. A dome of high pressure (see opening graphic) will be prevalent over the region. Typically, a prolonged high pressure system results in heat wave conditions because formation of clouds is difficult and air sinks. Sinking air is compressed and warms (adiabatic compression). Whenever I see prolonged periods of heat, I also worry about drought conditions and an uptick in wildfires.

Such extreme heat is not normal for this time of year. If you are thinking, “isn’t it a bit early to see heat this extreme?” The answer is yes. Legendary South Carolina meteorologist Jim Gandy tweeted,

Eight days ago was only the second 90-degree day of the year. It has been 90+ every day since with today the hottest so far this year. Now we are in a heat wave that will see record high temperatures next week.

Gandy pointed out that the average temperature for this time of year is 86 degrees F in Columbia, South Carolina. The National Weather Service office in the Atlanta area also sounded the alarm about the potential for broken records. The Saturday morning forecast discussion read:

Temperatures will continue to be the big story with highs a bit higher than Friday with mid 90d across the metro and around 100 across the SE portion of the area. Outside shot of all time May record in Atlanta for today but more likely for Macon with 99 degrees forecast.

According to the NWS-Atlanta, here are some of the all-time record highs for May:

I think that some of these records (and others) may be broken in the coming days.

Clearly, weather patterns explain this heat wave. I often cringe when people use a “cold day” to refute climate change. I also point out that “one hot” day or week doesn’t necessarily affirm it either. However, there is plenty of evidence that climate change is happening so resist the urge to use one day. The 2018 National Climate Assessment report (and most studies or statements from credible science organizations) released by the Trump Administration highlighted that extreme heat will become a “new normal.” For example, the figure below illustrates that the number of nighttime temperatures above 75 degrees F has increased dramatically. This is far more worrisome than daytime temperatures from the standpoint of human health according to scientific and health experts. The report points out:

Sixty-one percent of major Southeast cities are exhibiting some aspects of worsening heat waves, which is a higher percentage than any other region of the country. Hot days and warm nights together impact human comfort and health and result in the need for increased cooling efforts. Agriculture is also impacted by a lack of nighttime cooling.

Caption from the NCA18 report: the number of warm nights (minimum temperature above 75°F) has doubled on average compared to the first half of the 20th century and (bottom right) locally has increased at most stations. Sources: NOAA NCEI and CICS-NC.

Heat isn’t telegenic but it is deadly. When I give public lectures, I always ask the audience what weather event kills more people in the U.S. each year. I usually get answers like tornadoes, hurricanes, or lightning. People are often surprised to learn that extreme temperature, particularly heat, is the deadliest form of weather. The figure below illustrates weather-related fatalities in the U.S. according to the National Weather Service. It is clear that heat is deadly (Note: the NWS seems to have a typographical error concerning the year range in the legend, but the data is correct). Historically, deadly heat waves in Chicago and Europe have been related to warmer than normal nighttime temperatures and vulnerable populations (elderly, kids, and people without inadequate cooling resources). High daytime temperatures can also be dangerous if strenuous activities are undertaken without proper hydration and acclimatization. As I write this, my thoughts and parental “alert” are heightened today because my son has a 7-on-7 passing league football game on an artificial turf. I will hope that tournament officials have adequate plans in place. However, I will not leave my son’s well-being up to a plan of “hope.” I will make appropriate decisions as warranted.